In an award winning, in-depth report, the author explores Illinois’ complicated and controversial history of funding through a combination of state, local, and federal sources, and its 906 public school districts.

This thesis evolved over a period of five months and is the culmination of almost 600 hours of research, writing, editing, and reporting. Its research involved: reviewing thousands of pages of legislation, scholarly journals, and documentation on problem and compulsive gambling, economic impact studies, and education funding formulas. The work rests on a solid academic foundation of student testing data, decades of public school and municipal, city, and state budgets, and dozens of one-on-one interviews with subject matter experts. 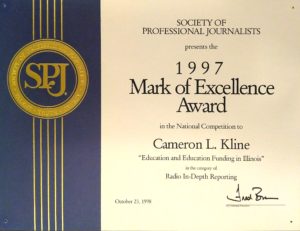 This essay was the 1997 Society of Professional Journalism Mark of Excellence Award Winner for In-Depth Reporting. The work was judged by professional journalists for accuracy, enterprise, ingenuity, adherence to high journalistic standards and the SPJ Code of Ethics, and journalistic significance.

The Mark of Excellence Award is SPJ’s preeminent award for journalistic excellence. The annual award program honors the best in collegiate journalism at the regional and national level.

SPJ is the nation’s most respected professional organization for journalists and was founded in 1909 as Sigma Delta Chi. The society is dedicated to a well-informed citizenry through the daily work of its nearly 7,500 members. It also advocates for First Amendment protections and works to uphold the highest ethical standards for the profession.